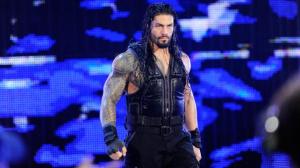 As a result of winning the Royal Rumble, Reigns will perform in the main event on wrestlings big stage, WrestleMania.

The result was widely predicted, and once other Rumble hopeful Daniel Bryan was eliminated, Reigns was always going to be the man WWE were heading with this year.

The crowd reaction was mixed, and it appeared that many were behind the man Reigns eliminated to win the Rumble, the Russian powerhouse Rusev.

The Rumble saw a couple of surprise arrivals, and one big return in the form of Bully Ray who made his first appearance in a WWE ring for 10 years.

Dwayne “The Rock” Johnson also appeared at the end of the show, helping Reigns overcome Kane and the Big Show.

The other big result of the night was Brock Lesnar successfully defending his WWE World Heavyweight Championship after a thrilling triple threat match against John Cena and Seth Rollins.

Lesnar is set to defend his title against Roman Reigns at WrestleMania on March 29th.