The Blackcaps have pulled off one of the most dominant performances in CWC history after annihilating England this afternoon in Wellington. 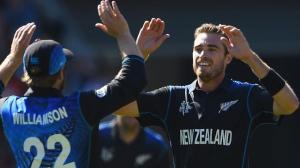 In a total collapse, England were rolled for just 123 after Tim Southee took career best figures of 7/33.

Not only career best figures, but Southee’s effort with the ball broke another record – the best figures for a New Zealand bowler in ODI cricket.

Middle order Joe Root was the only batsmen to really put up a fight with a score of 46 while the rest of the team proceeded to fall around him.

England captain Eoin Morgan managed to hang around at the crease for a while before getting dismissed for 17 off the bowling of Daniel Vettori.

In the run chase, Brendon McCullum bashed the fastest international half century for a Blackcaps batsmen in ODI cricket.

McCullum smashed eight 4’s and seven 6’s in his knock of 77 which featured a strike rate of over 300 to get New Zealand comfortably on track for victory as the evening break approached.

After McCullum’s dismissal, the crowd boo’d loudly as the umpires signalled the evening break despite the Blackcaps needing just 11 runs for victory.

When play resumed, Martin Guptill was dismissed on 22 as Chris Woakes snuck the ball through to the stumps.

The Blackcaps cruised to an easy 8 wicket victory and are arguably the form team so far at CWC.