Unsurprisingly, Special Education is not high on the priority list for National if they are to be re elected after the 2017 General Election.

The total investment into education is $379 million across a variety of different policies. So where does Special Education fit into it all? The $379 plan doesn’t speak a whole lot to Special Education. It certainly doesn’t tackle the issue of disabled learners being unfairly discriminated against.

Instead, National have promised that every child will get the opportunity to learn a second language.

Wagner Defends PM: “There Are Thousands Of Disabled People”

On Sunday, Minister for Disability Issues Nicky Wagner said that Prime Minister Bill English was a great supporter of the disability community.

“Today, he made Enabling Good Lives the centrepiece of the National Party’s campaign launch. He said that there are thousands of disabled people in New Zealand and that National respects their capabilities.”

There are far more pressing issues at hand in regards to Special Education in New Zealand. A simple promise to ‘deliver’ on Enabling Good Lives and provide the opportunity for learners to learn NZSL is not enough.

Disabled children need a fairer access to education. This starts with better education for teachers and support staff, but it also needs to be tailored to the needs of each individual. For example, the needs for a student with a physical disability are often entirely different to those with an intellectual disability.

Does National’s plan enforce schools to enrol students with additional requirements? No. Does it tackle the issue of principles bullying parents into getting their disabled child out of school? No.

The time old argument that the education system has made is that teachers are not equipped to ‘deal with’ children with special education needs. Well, get them equipped, and fast. National’s plan doesn’t put any pressure on schools to change their current attitudes toward taking on learners with disabilities.

What’s clear is that there is no tolerance of increased needs and additional support requirements by the education system. The bare minimum amount of funding has to stretch across the board, and often Special Education sits right at the bottom of it all.

National has promised little, to no assurance that this won’t continue if they get re elected come September 23rd.

Over 3700 new houses are expected to be built in Hamilton over the course of the next ten years.

Hamilton Mayor Andrew King is delighted with the result and says that development in the south is key to the city’s future.

“We are now one step closer to delivering on a promise we made to Hamiltonians a long time ago, to develop Peococke.”

The project will work as a three way partnership between Government, local Council, and developers. While 3700 new homes are expected initially, King projected that a total of 8000 homes would be built within the next 30 years.

Hamilton City Council CEO Richard Briggs didn’t seem so confident however, saying there is still a lot of work to do in order to ensure that no surprises emerge. Briggs believes that once public consultation has been sought, and a business case has been accepted, it will still take another four to five years until a clearer picture about completion emerges.

“We are not at the final stage yet. The Council will have to make some hard decisions to make during their 10 Year Plan discussions about what projects take priority.”

The announcement was made at a press conference in Hamilton on Tuesday –  but the hard work in implementing this plan is yet to begin.

As many in New Zealand continue to back Bill English, an elder at Ngapuhi has apologised for comments where he called the Prime Minister “a spoiled child”.

Kingi Taurua says he is ashamed of how his iwi have treated Bill English, and he has vowed to take it all back. The Ngapuhi elder now has egg on his face, but the damage is done. English is still in Europe on PM duties,

Letters that leaked yesterday reveal that English was told that the only way he could speak at Waitangi was if a Maori Representative did so on his behalf.  In a tent outside the Marae, political discussions would’ve been able to take place, and English was only allowed to speak freely there.

What was laughingly referred to as protocol, has now led to an apology from Taurua. The committee at Ngapuhi are likely to be stripped of their roles as many New Zealanders support English, and Taurua even went as far as saying that some supporters are “against the National Party”.

No other political party has been told they can’t speak at the powhiri, but did the media keep their knowledge of the letters between the two parties hidden? Some argue that Taurua wouldn’t have made such comments if was aware of the letters, but all along, the committee itself also knew of the discussions in the letters.

Ngapuhi will meet on Thursday and go into damage control.

This blog is a response to the one I wrote yesterday surrounding Waitangi Day and the New Zealand Prime Minister, Bill English.

It is my view, as I said yesterday, that English is right in his decision to turn his back on the celebrations. Like John Key did before him, English won’t put himself into a situation of protest, because Waitangi Day should be about celebrating New Zealand, and not a political forum.

That’s my personal belief, the day is about New Zealand and our way of life. The problem is, too many political interests and media discussion has influenced that very way of life, and some believe all respect has been lost along the way.

Not once did English say he would use his speaking rights to try and gain votes, or the respect of the Maori at Waitangi. That would imply that the Government doesn’t have the respect of Maori. English is the Prime Minister of New Zealand and deserved more respect than what he got in the letter Waitangi wrote in response to his request.

The issues surrounding Waitangi Day vary, and depending on the group of people you talk with, the sides are very different. What I am wrote about yesterday is Bill English, the Prime Minister of New Zealand, being told he cannot speak at the celebrations.

English himself said that to the media, that he had been refused speaking rights. My article was in reaction to that, and I shared my view on the Committee at Waitangi and the decision they made.

Subsequent stories have hit the news today that suggest it was English who didn’t want to speak at Waitangi, a direct contradiction to what was reported and said yesterday. We now find ourselves in a situation where the truth isn’t actually a certainty.

What is clear is that Waitangi Day is an issue for all of New Zealand, not just Maori.

I agree, we all need more education and balanced reporting on Waitangi. If both sides won’t work together, and the protests occur, like they are planned to, how is that supposed to happen? It is a no win situation and one that, clearly, English doesn’t want to be a part of. 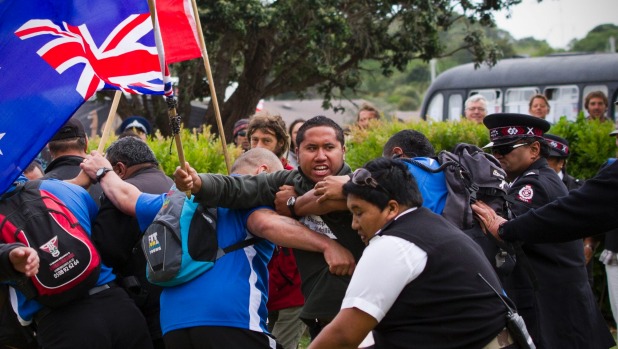 Another build up to Waitangi Day has led to another example of stupidity all round.

Bill English, the new Prime Minister of New Zealand, has decided to distance himself from the Waitangi Day celebrations after he was told he wouldn’t be able to speak at the treaty grounds. Before we go any further, I want you to keep in mind what I said in the latter part of that sentence.

When questioned by the media today, English defended his decision, saying that New Zealanders “cringe” at the prospect of protests. English went a step further and said he didn’t think it was appropriate that the Prime Minister, himself, wasn’t allowed to speak at such an occasion.

The Waitangi Day celebrations have always been volatile affairs for the Government. Anyone who says that the same protests won’t occur in 2017 are kidding themselves.

Can we really deny what English says? The Prime Minister was right on the mark with his comments. Of course it isn’t appropriate, and it doesn’t take a rocket scientist to come to that conclusion.

We are talking about the Prime Minister of New Zealand here, and it’s time people came to terms with that. Waitangi is not the place for protest, at least that wasn’t what was intended. It has become that because of those who’ve come after history, those who feel entitled, and ultimately, those who have no respect for the traditions of a day that celebrates what New Zealand is.

That last point is key in this blog, the lack of respect and the timing is why you see the Prime Minister pulling out.

Like in 2016, the Prime Minister’s speaking rights were cut off. Nobody in their right mind could blame John Key for turning his back on it last year, and nor should they blame English. Let’s not forget that English specifically reached out to Waitangi officials to ask about the conditions of his attendance, to which English was told that the committee had decided her couldn’t speak on “their” Marae.

Apparently it’s their Marae, remember that. And people say that English is being disrespectful to the history of Waitangi Day?

Straight out of the oppositions’ playbook, Labour leader Andrew Little labelled the Prime Minister’s decision as a “black mark” on his leadership. This is entirely incorrect, and English not attending Waitangi will have absolutely zero impact on the 2017 General Election. The Leader of the Opposition doesn’t fully back his claims either, but the announcement today gave him an opportunity to criticise.

So as we head into Waitangi Day in 2017, it is clear that those certain people, so-called officials, are still very much on that hypocritical high horse. That is a big shame, for New Zealand.

It’s out with the “special needs” and in with the early prevention. But National’s latest approach to education for disabled New Zealanders is a joke of the highest order.

Special education in schools is likely to be the biggest loser in a proposed change released today by the Government. Minister for Education Hekia Parata says that the term ‘special needs’ singles people out and creates a barrier to a fully inclusive education system.

To further quote her words, Parata said that by concentrating on learner’s deficits, students become marginalised in their education. END_OF_DOCUMENT_TOKEN_TO_BE_REPLACED